Meet Copper & Daisy. These gentle giants are always happy to meet new friends.  They love being part of the group. 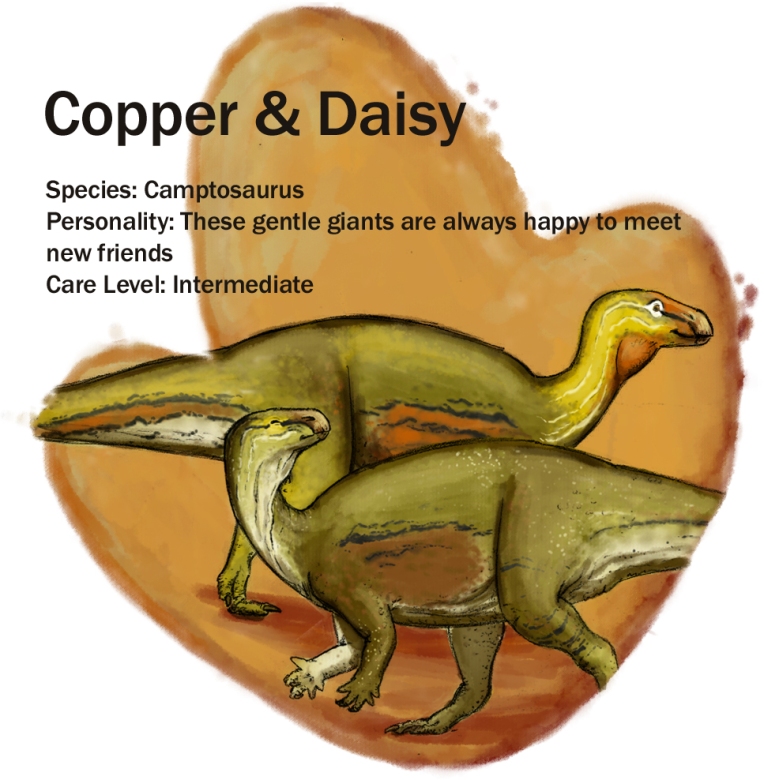 Daisy opened her beak and let her tongue hang lose in a gaping yawn that stretched all the way down her spine. She shook her head, and her scaly skin rippled as she shook the yawn down to the tip of her long, rigid tail.

Satisfied with her shake down, she lowered her head and nosed the conifer needles and knotted roots along the ground. She shuffled the foliage to one side with her hands- scraping at the dirt with the claw that was her thumb, grasping twigs with two strong middle fingers, brushing needles and dried ferns into a pile with the stubby and clawless end digits…She patted the patch of ground one last time, and eased her body down front end first, like a cow. She sighed and, after taking one last look to make sure her herd-mates were shuffling nearby, closed her eyes, neck arched comfortably over her shoulders.

A deep, short, croaking noise by her head made Daisy open her yellow eyes, and she stared at the disturbance.

He was standing over her, his deep red throat bloated and vibrating with each croak. In his beaked lips he held a conifer branch, the tender kind with soft, scaly needles all along the branch, and he brushed this down Daisy’s neck and flank. Daisy just closed her eyes. She didn’t want anything to do with this nonsense, but Copper softened his croak to a coo, dropped the branch at her feet, and tapped his beaked nose against her dappled green side.

Daisy tossed her head and grunted a quiet warning, and Copper backed away with his head low. He looked sideways at her, silent, and Daisy arched her neck and closed her eyes. She heard shuffling, heavy steps, and she allowed her mind to wander as she relaxed into her patch of dirt and ferns. The sun felt warm and soothing on her green, pebbly scales, and she breathed in the tang of sap and spice of crushed cycad fruit.

Shuffling steps moved closer. Thud, thud, thud…and the rustling of dried needles and ferns. A warm weight settled beside her, dry and pebbly as she, and she opened one eye. Copper lay next to her, his back against her brown belly, and his three-toed feet stretched out like a giant bird laying on its side. If he noticed she was looking at him he didn’t show it, because he kept his eyes closed and yellow neck arched like he was sleeping.

Daisy draped her head across Copper’s shoulders and shifted her weight against him, closing her eyes as his rhythmic breathing mingled with the ever-present shuffling of feet in the undergrowth.

I’ve been delightfully busy this month!

Baby Girl is sitting up, taste-testing food, and crawling down the hallways now, so she’s a little bundle of excitement around here. A solid night’s sleep is still pretty rare, but nap times are a little more predictable, and even if she’s awake she is easily entertained. So some days she “helps” me with my artwork. 😀 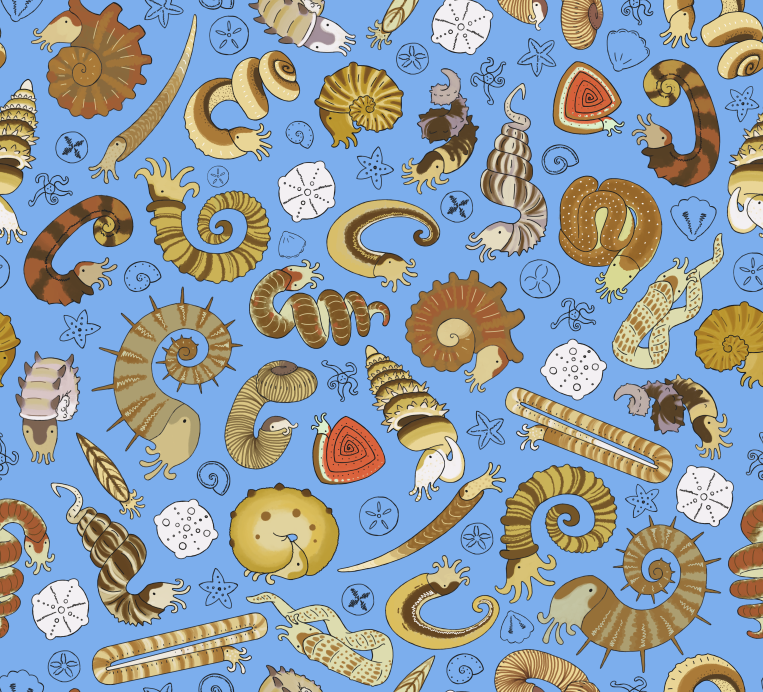 So now that this “quick” project is done and in my redbubble shop, here are a few things I’ve learned…

Now that I’ve finished this little ammonite pattern and a few critter updates, I am ready to jump back into the picture book again with fresh energy. 😀 Dippy’s reference model taught me that a reference model doesn’t need to look good to do what you need it to, so I will apply that lesson to finishing Steggy’s habitat. 😀

Hopefully I can make some real progress there over the next month! In the meantime, I hope you like Copper and Daisy’s quiet little adventure. 🙂

This little dino is a bit shy, but she’ll come out of the bushes for a sweet hug and a small treat. 🙂

Working on something new! I wonder what these little guys are squawking at? . #nanosaurus #othnielia #othnielosaurus #dinosaur #herbivore #sketch #progress #WIP #doodle #workinprogress #pencil
Meet Gertrude the Gargoyleosaurus! . She may be tough and spiky as a #gargoyle, but she loves hugs. 🤗 . #gargoyleosaurus was a medium-sized #dinosaur from #Jurassic North America, and lived around the same time and place as Stegosaurus and Allosaurus. She’s much smaller than those giants though, only about waist high for the average person. ☺️ . . . #petdinosaur #jurassicdino #halloweendino #dinohalloween #paleopetshop #patriciabujard #digitalart #paleoart #prehistoricpets #prehistoric
Maya the Juramaia! . Today was Maya’s turn for Critter of the Month, and Pete said I was ready to take a turn showcasing a species this time. 😁 . I must say I enjoyed it very much, and look forward to interacting with the prehistoric critters more. . . #paleopetshop #juramaia #prehistoricpets #prehistoricanimals #prehistoric #mammal #prehistoricmammals #pencil #sketch #pencilsketch #drawing #jurassic #jurassicmammal
Meet Chum the Hybodus! You can read his latest adventure, and other creature shenanigans, over at Paleopetshop.com ☺️ #shark #prehistoricpets #prehistoricanimals #prehistoricshark #dinosaurshark #hybodus #paleopetshop #patriciabujard #paleoart #digitalart #ocean #shallowsea
Meet Skippy the Hoplosuchus! . He’s a feisty, pint-sized, land loving croc-cousin from Jurassic North America. He lived alongside famous giants like Apatosaurus and Allosaurus. . Find out more and read a quick short story over at the latest blog post at Paleopetshop.com! . . . #jurassic #tinycroc #crocodile #crocodilian #prehistoric #notacrocodile #notadinosaur #petdino #paleoart #digitalart #painting #digital #smallpet #reptile #prehistoricpet #prehistoricreptile
Close-ups of the painting I posted yesterday. I know it’s not Christmas, but let’s just say Pete used some leftover wrapping paper for a stimulation treat. Zoos give predators puzzle treats and things like boxes so the predators can use their natural hunting instincts. ☺️. . Swipe to see the whole thing! . . . #dinosaur #dinosaurart #dinosaursofinstagram #allosaurus #present #dinosaurpet #petdino #petdinosaur #gift #art #digitalart #dinopainting #illustration #patriciabujard #jurassic #jurassicdino #dinosaursofthejurassic