Now here’s where things get a little muddy.  Bones are easy.  They’re hard, relatively common, and all bones that look about the same are going to have similar functions.  Back-boned critters all kinda have the same basic pattern.  Same with muscle.  The only squishy thing with muscle is determining how much is where, then you can figure out the basic shape on top of the bones.

But what about skin?  We’re pretty good at figuring out how a dinosaur works on the inside, but what did they look like on the outside?

Here is where a little mud or volcanic ash comes in handy.

When an animal is buried in soft, fine-grained sediment, then the critter’s skin, scales, fur, or feathers leave an impression.  Just like stamping into soft clay.  With more refined techniques in recovering fossils in the field (or prepping them at the museum), paleontologists are finding more “skin stamps” than ever before.

A hadrosaur mummy.  Keep in mind that the animal was most likely dead and already decomposing when it was buried.  We can’t know for sure if it had more fat under the skin than showed here or not.  Notice how thick and muscular the tail base is. 🙂

More hadrosaur skin impressions.  The impressions that look like a honeycomb are actually impressions of what’s underneath the bumps.  Reminds me of bubble wrap. 😛

Triceratops skin impression.  No one knows if those larger osteoderms would look just as they do here, or if larger quills or spikes where attached.  Speaking of quills…

A beautiful fossil of Psittacosaurus (distant, small cousin of Triceratops) at the Senckenberg Museum of Frankfurt.  We can’t be sure about color, but you can see the pattern of darker and lighter scales.  Notice how much muscle this critter has, and those quills!  A one-of-a-kind find.  Remember my post a couple weeks back about how hard it is for an animal to be fossilized?  How much more amazing that we have something like this?

Here’s a closer look at those quills…

The general consensus is that these quills are a feather-like integument. Here’s what we don’t know…

Now that we’re on the subject of feathers…just look at this exquisite fossil of archaeopteryx. 🙂 It never gets old…takes my breath away every time I see it.

Archaeopteryx used to be famous for being the “first bird”, now we know that just about every smallish dinosaur (and even some big ones) where wearing similar outfits.  Yes, most carnivorous dinosaurs are known to have feathers, it’s just a question of what kind, and how much. 🙂

I know that looks like fur, but those are fluffy feathers all over this little sinosauropteryx.  Notice the bands of light and dark color on its tail.

Here are some more birdy feathers on a larger dinosaur.

This is Zhenyu- Zhenya- Zen- Oh forget it.  Let’s just say she’s a cousin of those infamous raptors from Jurassic Park.  She’s about five feet long, so closer to the real turkey-sized Velociraptor.  Fully feathered.  Just look at those glorious wings!

Here’s a close up of those feathers.  Notice the full wing in photo D below.  You can clearly see primary, secondary, and covert feathers, just like what you’d see on a modern bird wing. 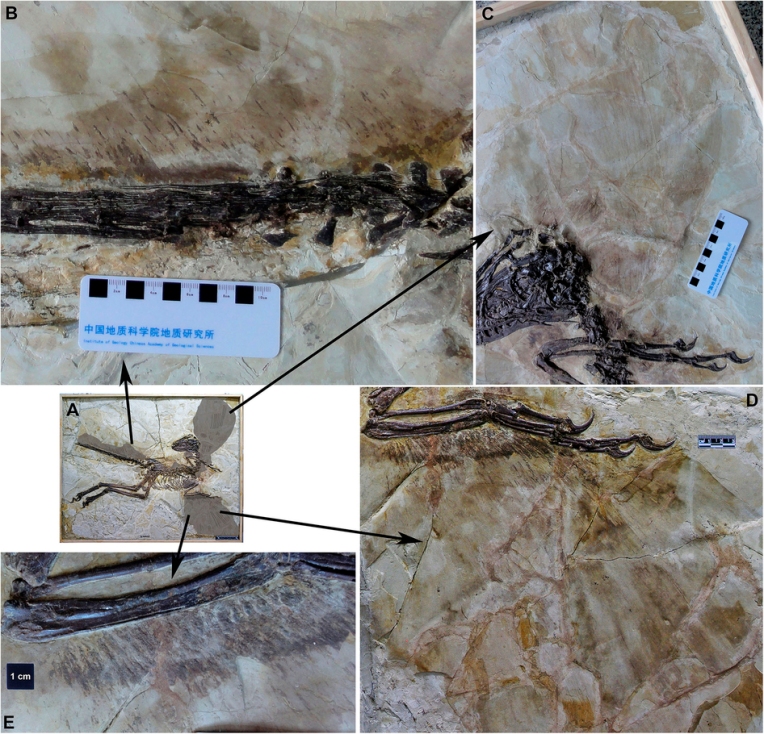 But wait, it gets better. 😀

Not quite as pretty, but look at figures A, B, and C below.  The bumps that those arrows are pointing to are called quill knobs, and figure D shows us what that means. 😀

Keep in mind that this fossil came from a critter called Dakotaraptor.  This guy was every bit as big as the ones in Jurassic Park.  And it has wings.

A prettier reconstruction of Dakotaraptor’s wing.

These and other fossils from even larger dinosaurs such as yutyrannus (T-rex’s Chinese cousin) that also preserve feathers, can give us clues for exactly how diverse and widespread feathers are in the dinosaur family tree.

With fossils like these we can learn about the structure of the wing, and that these animals also had a fur-like coat of feathery fuzz covering their bodies.  No scaly or naked skin here.

So there is a lot we do know, but still so much left in the dark.  With bones, muscles, and a few hints of soft tissue, next time we’ll be heading off into uncharted waters. 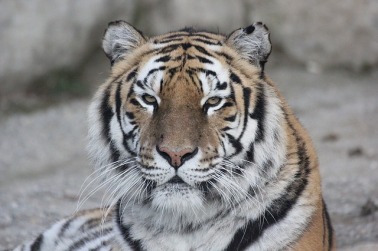 Quick Question: These fossils are all amazing, but there is still so much we don’t know.  Take a quick look at the lion and tiger above, and then look at the skulls below.  Can you tell which one is which?  Leave your answer in the comments, I’d love to hear from you! 🙂

These are replicas from skullsunlimited.com, but they get the point across 🙂 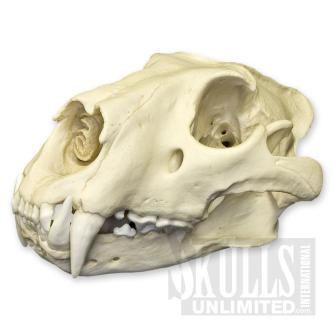 Fleshing out the Bones Series:

8 thoughts on “Let’s Put Some Skin on That (how much we know, and don’t know, about the soft stuff)”