Meet Nessie.  This curious undersea critter is always looking for an opportunity to nab a treat.  You’ll never see her coming!  Her favorite game is hide-&-seek. 🙂

Alluminum and plastic hinges creaked as Pete shifted in the canvas lounge chair, his long, sinuous legs stretched out in front of him and crossed at the ankles. His skin was warm in the sun, and the late morning rays looked red under his closed eyelids. A cool, salty breeze whispered through the swaying rustle of palm leaves. He sighed, his handlebar mustache curled in a smile under the broad-brimmed straw hat that shielded his face from the sun’s strongest rays.

He tilted his head, squinting down at the turquoise water from under the brim of his hat. An orange buoy bobbed gently up and down, and a few green, black-striped fish darted around it beneath the rolling surface, but no sign of her yet. Pete leaned his head back again, hands behind his head. She’ll come. She always did.

Lazily, he reached down over the arm of the chair and felt for his water bottle. His fingers touched metal, cool compared to the warmth of the surrounding air, and raised it up to twist off the lid, tip his hat up, and take a lukewarm drink. He screwed the cap back on and set the bottle back on the lid of the large cooler he was using as a side-table.

A slap against the water roused him from the lulling hum of insects, the hush of waves, and the constant throng of bird calls. Pete sat up and straightened his hat. The little fish were gone, but a golden-brown sea turtle cruised past the orange buoy.

Only it wasn’t a sea turtle. It had no shell, and its snaggle-toothed head was at the end of a long, muscular neck. Pete stood, shuffled a step to the very edge of the wooden deck, and folded back down to crouch flat-footed in one smooth motion.

“There you are Nessie!” The mustache and small beard on his chin parted in a smile that showed his teeth. “Have you been exploring today? You had me waiting on you girl.” Nessie’s head rose a little ways out of the water, neck and body almost vertical under the surface and paddle-like limbs pumping and rowing. She opened her mouth in a gaping, needle-sharp grin, which would have been terrifying if it weren’t for the large eyes at the top of her head. They had the same cross-eyed gaze of someone trying to see if a fly landed on their nose. Pete laughed and twisted his torso to reach back to the large blue cooler, shifting his feet a little so he could turn enough to open the lid.

When he turned back around to look down on Nessie from the edge of the dock, he had a cold, wide-eyed squid in one hand, and something that looked like a large plastic snail’s shell in the other. Mustache twisted in a grimace, Pete squished the dead squid into the open cavity of the shell, then raised it above his head with a grin.

“You ready girl?” Nessie snapped her jaws twice in response, then sank below the surface without so much as a ripple. She hung in the water there, waiting. Pete tossed the coiled shell into the water, and it splashed off to Nessie’s right.

Nessie rowed her flippers hard, arching her neck sideways to help her make the turn. A flipper broke the surface in a sweeping splash that caught Pete’s bare feet and swim shorts. Her streamlined body sliced through the pristine water, and she dove after the sinking shell. She caught the squid in her fish-trap teeth, pressed her left flippers close to her body, and rolled with a hard push of her right flippers. The shell drifted down to the bottom of the lagoon, empty. Nessie arched slowly back to the surface as the squid disappeared down her throat.

Pete tossed another plastic ammonite shell stuffed with squid, then a lone squid, then a fish. Nessie caught them all. She darted her head sideways in whichever direction she turned, and her body soon followed with a powerful push of her muscular paddles. Soon the cooler was empty of everything except ice and a netted bag. He grabbed the bag and hung the strap on his shoulder.

Now Pete had to retrieve the thick plastic ammonite shells from the bottom of the lagoon.

He pulled on a rope tied to the post at the corner of the dock, and the buoy bobbed as he reeled it in. He swung it up on the deck with a wet thunk, then rocked back and swung first one leg, then the other over the edge of the deck so that his bare feet dangled above the water. He pushed against the rough planks and slid into the water with a plunk.

Pete’s plunge into the water slowed down when his white cotton t-shirt ballooned around him. He flattened it against his body, took a deep breath, and frog-kicked towards the sandy bottom.

Nessie was already there, disturbing clouds of sand as she nosed into the empty shells. She looked up when Pete swam closer, a shell still perched on the end of her nose.

Pete’s eyes crinkled in a smile, and he rubbed the tiny, round scales along her thick neck with one hand while taking the shell with the other. This close, Nessie was almost double his size, and most of that length was neck. After another quick pat on her neck, he grabbed another of the bright yellow shells nestled in the sand, set it in the bag, and kicked off the bottom towards the surface.

At the surface, Pete tossed the two shells he had onto the deck, took another deep breath, and dove back down. Nessie was still stirring up the sand, her nose in a large, pink shell. He reached for it, but she turned away from him with a cloud of sand.

Pete reached out and grabbed a rear flipper as she passed, and was almost thrown straight off again as it swept up and down. The paddle was thick, flat, and pebbly, and didn’t have much to hold onto, so he reached out with the other hand and hooked his fingers in the folds of skin and scales at the muscular base.

Bobbing up and down with the easy flow of Nessie’s sea-turtle shaped body, Pete slid sideways and shifted his hands so that one hand held onto the thick base of each rear flipper. With his body straddled over Nessie’s thick tail, he didn’t feel like he would be thrown off with each downward stroke. A pity he couldn’t enjoy the ride, unless she happened to swim close enough to the surface for him to take another gulp of air.

As quickly as he could against the water and the force of Nessie’s slipstream, Pete brought his knees up to his chest and pulled forward until he could curl his toes into the creases and folds at the base of Nessie’s rear flippers. Secure, he pushed with his legs to grab the base of each front flipper with his hands.

Nessie turned her head to grin at him with needle teeth, the prized shell still on her nose. He couldn’t let her take this one. It’s his last big pink one. Why did she always take the pink ones? His lungs were starting to burn.

Again Pete brought his legs forward and curled them into the base of Nessie’s front flippers, a bit more of a challenge since they rowed up and down a lot more than the back ones. He kicked forward and grabbed around her thick neck before she could throw him off. Now if he could just reach that shell on her nose…

Nessie darted her head sideways at his hand, and he pulled back quickly before those teeth could get him. Silly Nessie, his hand wasn’t an octopus or squid! He’d have to try something else fast. He really needed some air now.

He grabbed just behind her head with both hands. Firm enough to have a good grip on the creases behind her skull, but gentle enough not to squeeze her, and pulled her head upward towards the surface.

Yes! She changed course towards the direction her head was pointing, shell still miraculously on her nose. It must be really stuck. And soon her head broke the surface of the water.

Pete grabbed the shell as he kicked off of Nessie towards the sweet air above. After a few grateful gulps, he held the shell triumphantly above his head and laughed.

“Woagh!” he coughed and tossed the shell up on the deck. “You almost had me there Nessie.” Nessie drifted closer to him, the tips of her flippers splashing the surface. Pete chuckled and leaned back to reach her back with his feet, rowing his arms to keep his head above the water. Nessie gazed sideways at him, mouth closed.

“Aw, don’t be upset girl, maybe you’ll win next time. You’ve already stolen five of them.” Nessie opened her mouth wide and flexed her neck up and down a little, smacking the water. A curl of a smile appeared behind Pete’s dripping mustache, and his eyes crinkled.

“That’s my girl,” he said fondly. He rubbed her pebbly back, golden with flecks of white. He frowned thoughtfully. “It would be good to know where you’ve hidden them all. Always the pink ones…” Nessie exhaled a spray of sea water from her nose, and sank down under the surface.

I’ve been stealing snippets of time this month, and now I can share something that has me super excited. 😀

I opened up a little shop on Redbubble!

At first I just wanted a new case for my phone, and when I couldn’t find what I wanted, I decided I’d find a way to have my own art for the case. Redbubble looked to be the highest quality.

Since I’ve been prepping a bunch of critters for a presentation at my local library, I now have some print-worthy designs. So I’ve been uploading a few of the best ones to Redbubble. 😀 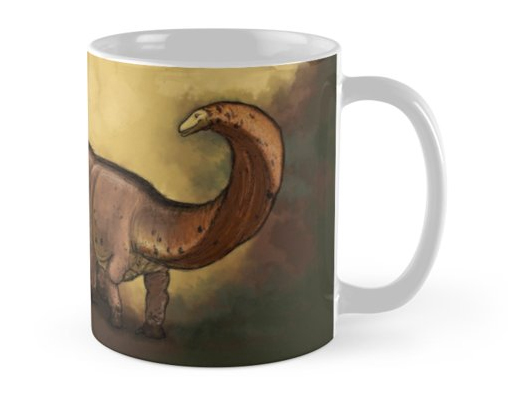 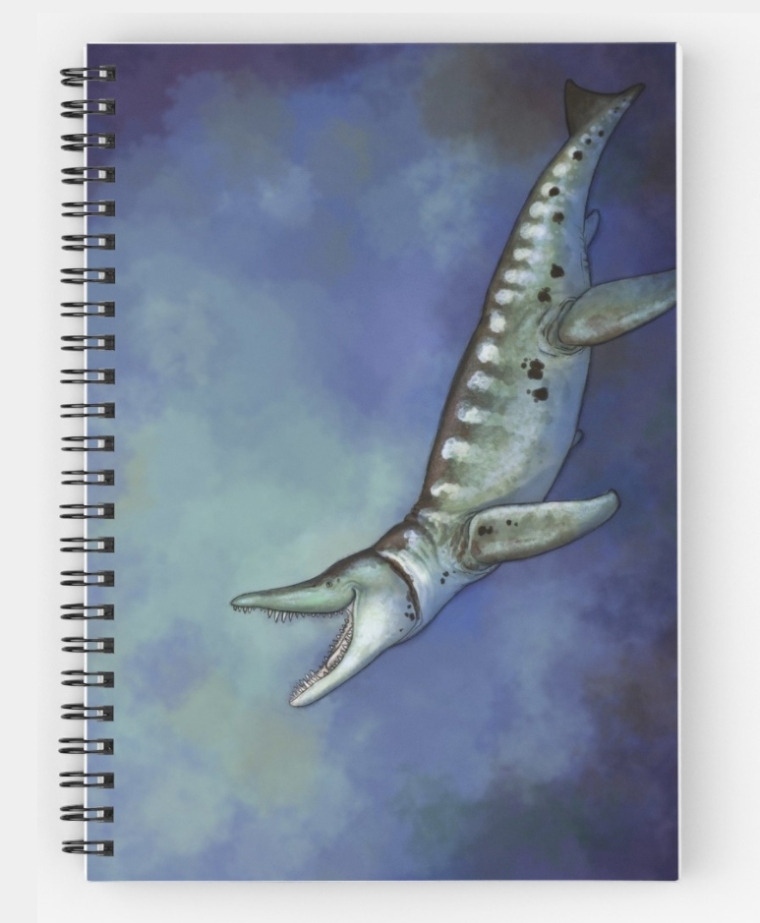 I’m mostly just uploading the sort of things I personally would like to buy, but there’s a few other things like pillows and laptop cases that look pretty good too. 🙂 I totally want an Ajax mug and will probably eventually own a notebook for each of my critters, once they’re all set in an artistic background. 🙂

Since progress on the book is slow, and I have so much artwork already complete, I might as well use that right? I plan on doing something with the short stories that are adding up at some point too. You do what you can with the resources and time you have, amiright? 😀

I hope you like this month’s story. It’s not as polished as I would like, but I had fun with it, and Nessie took me for a surprise ride at the end there. 🙂 She’s a silly goose.

Thank you so much for joining me here, I truly appreciate it, and I hope to see you again next month! I would love to hear from you in the comments! 🙂

Edit: Here’s my Redbubble shop if you want to check out which critters are available for “adoption” 😀

This flyer will dive high and low for a fishy treat.

12 thoughts on “Critter of the Month: Plesiosaurus”