“It’s your turn for Critter of the Month Douglas! You ready to go?” Dr. Pete Diggle poked his head into the large enclosure, his handlebar mustache curling up in a smile at the dog-sized creature bounding towards him.

Its furry body wriggled with energy, and it vaulted on the claws of its folded wings like a pole vaulter to jump up into Pete’s outstretched arms. Pete laughed when Douglas nuzzled his hair. The large head cocked this way and that like a bird’s, large eyes focusing on every detail as Pete backed out of the large aviary and closed the latch…The trees that shaded the garage-sized enclosure of wood and wire mesh, the leaves that fell to the ground in the sudden cool breeze. Pete’s beat up white truck parked in the narrow driveway, right by a yellow painted shed, and a bright red bucket that sat against the wall of that shed. A lizard that scurried behind that bucket…

Douglas scrabbled against Pete’s shirt with small, sharp claws, pushing against the arms that held him. One large, leathery wing unfolded and buffeted Pete in the face. Pete’s grip loosened, and Douglas unfolded both wings to their full, five-foot span, and jumped down to the ground running.

“Wait Douglas, wait!” Pete ran after the feisty pterosaur, but the terrier-sized creature was nimble for an animal with wings for front legs and such an over sized head. He bounded for the shed like a dog after a squirrel, his long, thin tail bouncing like a flag behind him. 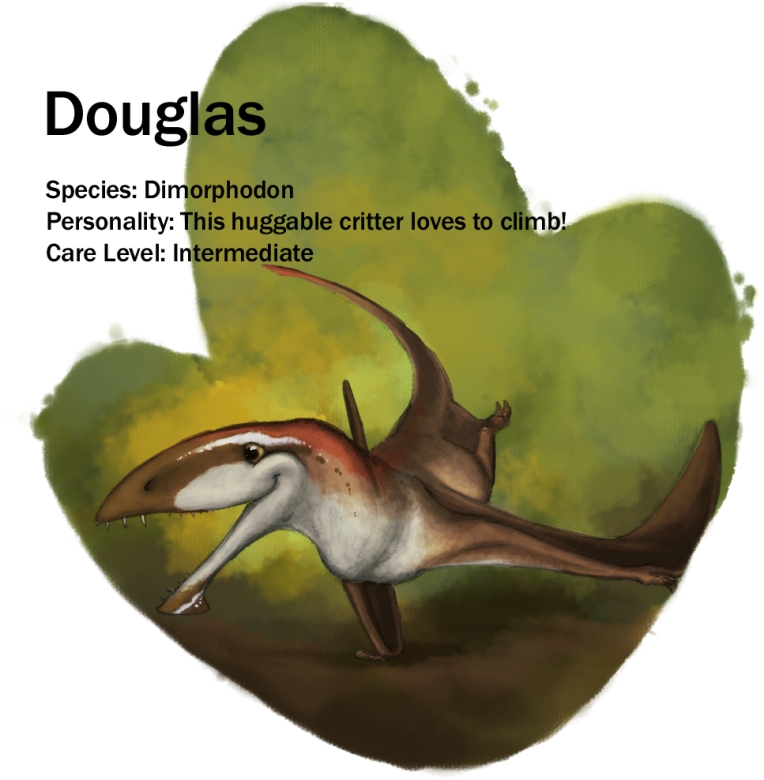 Douglas got away! It won’t take long for Pete to catch him though, so stay tuned! I hope to see you again in a day or two. 🙂

4 thoughts on “Critter of the Month?”

Meet Gertrude the Gargoyleosaurus! . She may be tough and spiky as a #gargoyle, but she loves hugs. 🤗 . #gargoyleosaurus was a medium-sized #dinosaur from #Jurassic North America, and lived around the same time and place as Stegosaurus and Allosaurus. She’s much smaller than those giants though, only about waist high for the average person. ☺️ . . . #petdinosaur #jurassicdino #halloweendino #dinohalloween #paleopetshop #patriciabujard #digitalart #paleoart #prehistoricpets #prehistoric
Maya the Juramaia! . Today was Maya’s turn for Critter of the Month, and Pete said I was ready to take a turn showcasing a species this time. 😁 . I must say I enjoyed it very much, and look forward to interacting with the prehistoric critters more. . . #paleopetshop #juramaia #prehistoricpets #prehistoricanimals #prehistoric #mammal #prehistoricmammals #pencil #sketch #pencilsketch #drawing #jurassic #jurassicmammal
Meet Chum the Hybodus! You can read his latest adventure, and other creature shenanigans, over at Paleopetshop.com ☺️ #shark #prehistoricpets #prehistoricanimals #prehistoricshark #dinosaurshark #hybodus #paleopetshop #patriciabujard #paleoart #digitalart #ocean #shallowsea
Meet Skippy the Hoplosuchus! . He’s a feisty, pint-sized, land loving croc-cousin from Jurassic North America. He lived alongside famous giants like Apatosaurus and Allosaurus. . Find out more and read a quick short story over at the latest blog post at Paleopetshop.com! . . . #jurassic #tinycroc #crocodile #crocodilian #prehistoric #notacrocodile #notadinosaur #petdino #paleoart #digitalart #painting #digital #smallpet #reptile #prehistoricpet #prehistoricreptile
Close-ups of the painting I posted yesterday. I know it’s not Christmas, but let’s just say Pete used some leftover wrapping paper for a stimulation treat. Zoos give predators puzzle treats and things like boxes so the predators can use their natural hunting instincts. ☺️. . Swipe to see the whole thing! . . . #dinosaur #dinosaurart #dinosaursofinstagram #allosaurus #present #dinosaurpet #petdino #petdinosaur #gift #art #digitalart #dinopainting #illustration #patriciabujard #jurassic #jurassicdino #dinosaursofthejurassic
Alfred has a present! Let’s pretend Pete got some leftover Christmas wrapping just to make his treat extra special. For large, energetic, and relatively smart critters like Alfred, you always have to keep them busy or they’ll get into trouble. . Doing things like this makes sure Alfred doesn’t do something silly like chewing on the fence. 😁 . . I’ll post close ups soon! . . . #dinosaur #allosaurus #present #surprise #dinosaurpet #petdinosaur #paleopetshop #patriciabujard #illustration #digital #painting #dinosaurart #art #jurassic #jurassicdinosaur