Meet Alfred.  The lion of the Jurassic!  The prince of the Mesozoic! The…oh, there he goes after another butterfly.  All he needs to be happy in life is his food, his chew toy, and a nice long nap. 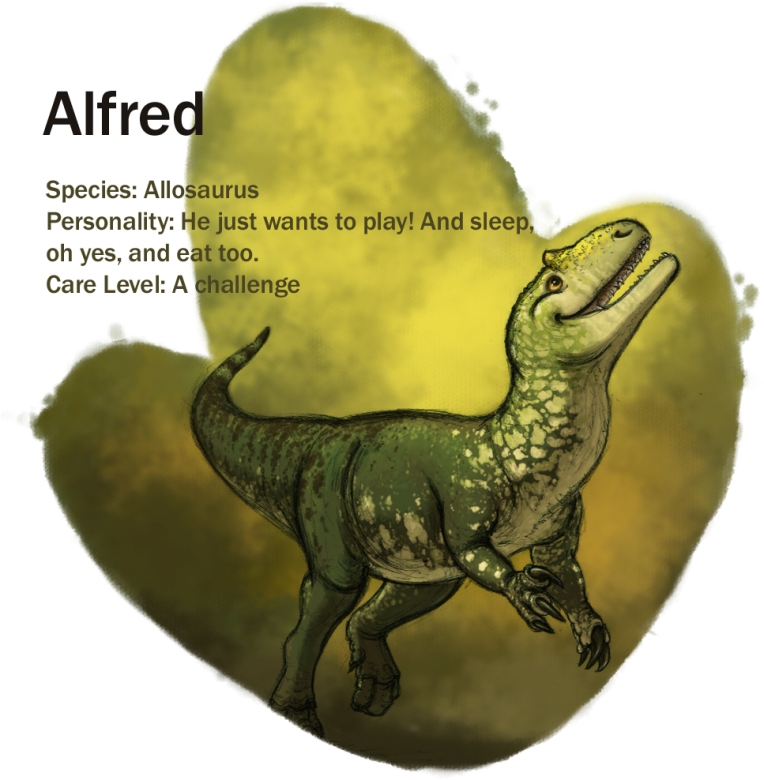 Alfred looked up, head cocked to one side so that one yellow eye focused on a shimmering red box against the concrete wall of his paddock. He sat heavily on his haunches, watching the glinting snowflakes in the sunshine, and blinked in surprise when it moved.

Like an alligator shifting its scaly bulk, Alfred rose up on his strong hind legs and stepped forward, nostrils flaring as he sniffed the air. A sweet, coppery tang filled his sinuses, and a gurgle almost like a purr escaped the soft scales of his throat. He held his three-clawed hands close to his body as he approached the treasure, waiting in the shadow of a ginkgo tree. When the box did not move, he nudged it gently with the tip of his golden snout.

The red box jumped. Alfred snapped at it with lightning jaws, but they closed on nothing but air. His target rose above his head, and he heard excited voices. With all his strength he threw his body into the air. His teeth closed and ripped into a thing that crumpled. His claws raked into the frail shell as he landed heavily back to the ground, no prize could escape those curved talons.

With all the ferocity of a child on Christmas morning his claws and teeth ripped the bright wrapping paper and tore into the cardboard box. Laughter distracted him, and he looked up to the platform that stood outside the wall. Faces he recognized looked down at him, human faces, shining with smiles and the laughter in their high voices.

Alfred returned his attention to the box. With surprising gentleness for an animal of his size and strength, he hooked the teeth of his lower jaw under the string wrapped around the box. Carefully he lifted his tattered prize, and carried it high and proud back to his private fern grove.

Happy Holidays! I hope you’ve been having a safe, restful, and joyful holiday season, and that you are ready for a fresh start this new year. 🙂

I hope you enjoyed this little story. I had fun illustrating Alfred’s little Christmas surprise. 😀 Can you guess what was in it?

Here’s the picture that inspired it. Animals at the zoo get to enjoy some holiday cheer too! 😀

Do you have any big plans for the new year? I’ll share mine. 🙂

And that’s it for now! I’ve heard that if you keep it to just a few goals it’s a lot more manageable. I’m hoping to have these tasks done by the halfway point of the year, so we’ll see. I know I can at least get 3 out of these done! 😀

Thank you so much for your support and feedback. It really means a lot to me, and I’m really looking forward to another great year full of cute prehistoric critters with you. 🙂

This fearsome little critter has a heart of gold that is bigger than he is!

18 thoughts on “Critter of the Month: Allosaurus”