Meet Picasso.  This quiet softie loves spending time with his special person.  Snuggling under the tree to hear a good story?  That sounds like a lovely way to spend a warm afternoon. 🙂 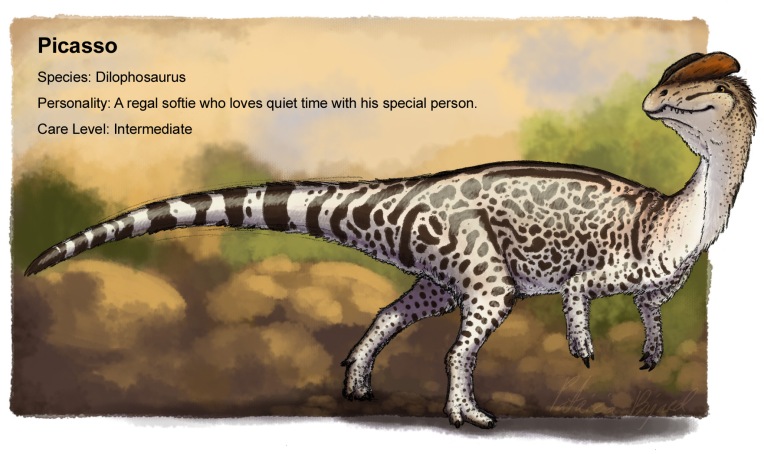 Picasso continued his routine patrol of the fence with all the decorum of a peacock. Each step deliberate so that not a single scrubby twig shifted, his fur-like feathers barely brushing against the wire grid too high to jump. Dry ferns and prickly scrub grew through the mesh at the foot of the fence, but ahead there was an emptiness in the dense line of browning vegetation. And the fence…the fence was gone!

Picasso stopped. He patrolled this section of fence every day. There was no gate here, and yet there was a clear gap where fence line suddenly disappeared, and then reappeared just as quickly a few feet further down. He stepped towards the gap in the fence, head cocked sideways, and squawked in surprise when a second flamboyant gentleman strutted alongside him.
The intruder seemed equally flustered, and Picasso swelled a little at the sight of the intruder’s lack of confidence. He bobbed his head, and stood tall to flash twin, half-moon crests of red and black horn.
The intruder rose up and arched his long neck too, but Picasso refused to be intimidated and stamped his foot with a snort. The same moment his rival kicked at the ground.
Picasso curled his neck forward with a challenging hiss, tail lashing like a whip. He shook his head from side to side in a motion that vibrated down his long neck and ruffled the spotted pattern of his feathered body down to his tail. But his opponent mirrored his every move.
Picasso darted forward. Staggered back. Shook the stars out of his vision and the smarting pain at the snaggle-toothed end of his thin snout. His rival shook his head and stared back at him, equally hurt and surprised. Good. Picasso shrieked and darted again, kicking with powerful clawed feet and snapping with needle-sharp teeth, arms spread wide to grapple his opponent.
But his feet slid against a smooth, hard surface. His clawed fingers slipped and found nothing to hold onto, and he tumbled back into a flustered heap. Together with his battered adversary, Picasso unfolded from the ground with slow dignity. His rival looked ruffled, a few teeth sticking out at odd angles at the end of the bruised snout, and Picasso waited a few polite moments. Was he considering backing down as much as he was?

The challenger deflated, his feathers smooth and tail level with his body. They watched each other for a moment, yellow eyes staring with hawkish intensity, every birdlike twitch of their heads in sync with one another. Then, as if with an unspoken agreement, both rivals lowered their heads and continued side by side along the line of browning foliage until the challenger disappeared at the edge of the gap. Alone, Picasso patrolled the fence line.

Picasso got an update! I did like his previous colors, but upon a little further research on his habitat I thought he needed an upgrade. I was doing a little jog down memory lane and found this old painting. 🙂 The idea was to show how the image of dilophosaurus has changed over time, starting with a retro-saurus on the left of course. Next up are the monstrous, almost skeletal, awesome-bro creations of the Jurassic Park franchise. The little green one is the movie version, and the leopard print inspired by the description in the book. The last one was my best attempt at a more modern, slightly more speculative take on Dilophosaurus. It’s uncertain if Dilophosaurus had feathers, but it’s not pure fantasy to play with varying amounts of feathers or scales.

Seeing this made me want to revisit Michael Crichton’s original description in the Jurassic park books. When Dr. Grant sees a pair of them at a river, they are described as “ten-feet-tall and spotted yellow and black like a leopard,” with “two broad curving crests that made a V shape above its head.” These crests are said to be decorated with “red and black stripes.”

Of course, I imagine the creatures in the book are far more similar to the bright leopard print I have here in the older painting, but I wanted something that looked a little more muted. Bright jaguar oranges and yellows are good if you live in the rain-forest, but Dilophosaurus lived in an arid environment, rather similar to how its home turf of Arizona and New Mexico are now actually.

I really like this new pattern. It’s a mix between leopards, jaguars, and the king cheetah. 🙂 Never heard of a king cheetah? It’s a rare mutation that makes the polka-dot pattern turn into beautiful, irregular blots and lines along its back. Only six have ever been seen in the wild, and they are absolutely gorgeous!

In other news…I’m making progress bit by bit! Here’s what I have for this month. 🙂 I know Picasso isn’t the same color as his profile, but meh, I already had this little guy colored in before I decided to update him. 😀 Thank you so much for stopping by, I’ll see you next month! 🙂

Don’t let the pebbly skin fool you, she’s all melted chocolate and hugs! 🙂

Share your guess in the comments! She’ll be one of the critters over on the critter page. 🙂

9 thoughts on “Critter of the Month: Dilophosaurus”

Meet Gulper the #Leedsichthys! He’s a giant #fish from the #Jurassic Period, and he cruised the world’s oceans in search of giant clouds of tiny creatures called plankton. Just like whales do today!
Bella the Camarasaurus loves to sing along with her very large, very loud herd.
2020 has been a crazy year, but I've learned a lot and look forward to taking those lessons into 2021!
Happy Holidays! My Dear husband gave me an iPad and apple pen, and this is my first time playing with procreate. I've been having a lot of fun with it!
It’s Fossil Friday featuring the 3 fish, #Morrolepis, #Hulettia, and the #Leptolepis species from the #Morrison Formation!
Today is #fossilfunfriday featuring Torvosaurus!